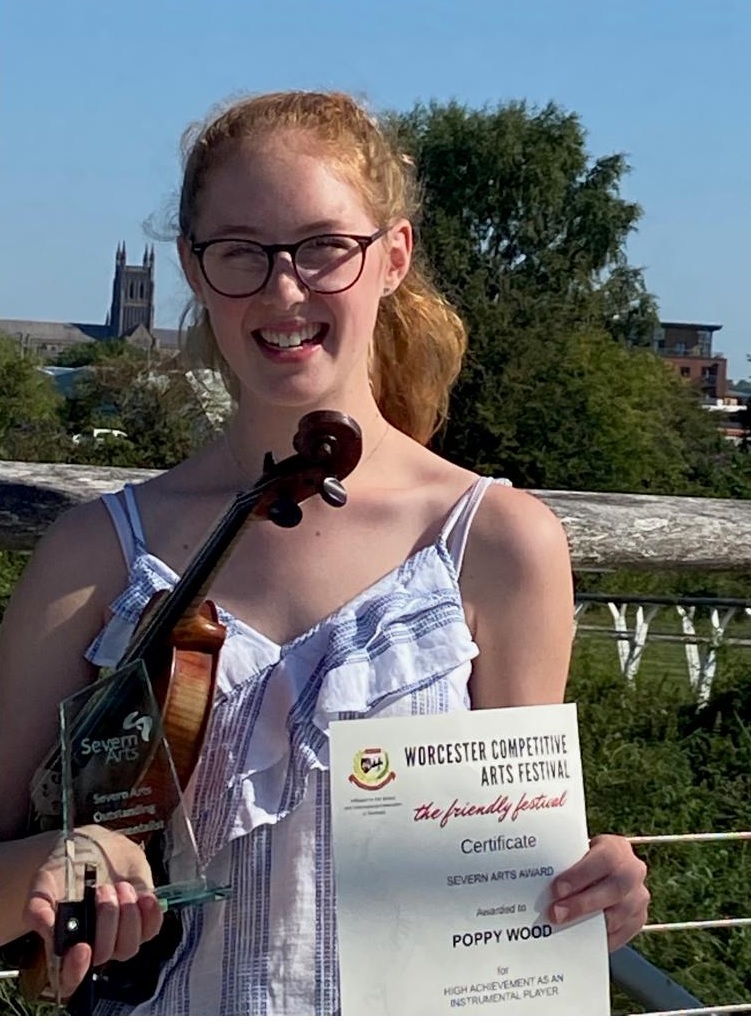 A CELEBRATION of the arts in Worcester was held despite the earlier dates and concert being cancelled because of the ongoing Coronavirus pandemic.

The annual Worcester Competitive Arts Festival begun on March 14 but due to Covid-19 and lockdown the festival came to a halt on March 21, much to organisers disappointment.

On top of the postponement, festival chiefs were forced to axe their annual concert at Huntingdon Hall where students display their talents and receive awards.

Although somewhat delayed, organisers have now been able to present these special awards to a number of outstanding performers in their field.

Arts chiefs presented the Bertulis Cup for writing and speaking a poem to John Morris of Stourbridge for his poem ‘Colin, The Allergic Bee’. John was the overall winner of all the classes adjudicated by Giovanni Esposito, better known as Spoz who was crowned the eleventh poet laureate in 2006.

Cheltenham resident Rosa Gray was the winner of the Worcester Inner Wheel Cup for Young Performer of the Year in Music while fellow Cheltenham teenager Jasmine Went was awarded a new trophy for Piano Solo Open class kindly donated by Vale Pianos of Worcestershire.

Andrew Vas was presented with the Worcester Arts Council trophy for high achievement in music to mark a poignant end to competition life for the talented teenager.

After competing in the festival for a number of years, Andrew will now be taking up his place at University.

The festival was originally known as the Worcester Orchestral Society Music Festival and founded in 1951 with David Wilcox as president of the society. It was not until 1993 the title ‘with Speech and Drama’ was added and the present title was adopted.

Approximately 1,000 entries are received each year with a range of classes for piano, strings, woodwind and brass to duets, small ensembles, orchestras, bands, musical theatre, rock and pop singing and choirs. Creative writing classes are also on the syllabus which gives competitors the opportunity to write and speak their own compositions.

Organisers hope the 2021 festival, the 70th anniversary event for the festival, will take place on March 13 and 20 before a celebration concert on March 28 at Huntingdon Hall to celebrate the musical and dramatic highlights on offer.

Anyone who wishes join the committee of volunteers or find out more about the 2021 event can visit www.wcaf.org.uk for more.

AMBITIOUS plans for a £28million transformation of Worcester using Government cash will be debated by city council chiefs next week. Councillors on the Policy and Resource’s Committee will be asked to give the bid to breathe new life into Worcester the thumbs up when they meet on Monday (January 25). Worcester City Council will submit […]
The post City’s £28m revamp plan appeared first on The Worcester Observer. Worcester – The Worcester Observer …

THE MET Office has issued a yellow weather warning for heavy rain across Worcestershire today, tomorrow and into Thursday. The first rain is expected to arrive this afternoon and it is then expected to be continuous and heavy, through to the night and into the early hours of Thursday. It warned homes and businesses could […]
The post Flood fears as Storm Christoph sweeps in appeared first on The Worcester Observer. Worcester – The Worcester Observer …