Town raced into a 2-0 lead in the first half but were pegged back by Lads after the break before Clark’s late winner made it four wins from four to leapfrog their opponents to the top of the table.

“I am always happy when I get on the scoresheet but this game was all about getting the win,” admitted Clark.

“It didn’t matter who scored as long as we got those three points in the bag. You can’t ask for any more than four wins from the opening four games.”

Co-manager Dene Whittal-Williams was impressed with his side’s ability to react to a poor start to the second-half.

“We had to weather the storm, but the lads managed it and that is something we’ve not always been able to do in situations like this over the past couple of seasons, so in that sense it is progression.”

“It was disappointing to see us concede two goals and the manner in which we conceded them.

“That said, we managed to regain our composure, put our bodies on the line and Clarky popped up with what proved to be a late winner.

“We still had a bit to do after that to see the game out and in the end we were both relieved and pleased to get the three points.

“There were positives to take out of the game; particularly our tempo and patterns of play during that opening period plus our resilience because we knew they would dig in and ruffle feathers at some point and we stood up to it to get the win this time.

Town will look to continue the perfect start on Tuesday evening as the early season league leaders travel to Thornbury Town (7.45pm KO).

“We’ll now assess how the lads are for Tuesday’s trip to Thornbury Town. We’ll got there with a winning mentality and look to do the things that have served us well so far.

“It will be tough, they all are, but we will be prepared and ready for the test that we will face.” 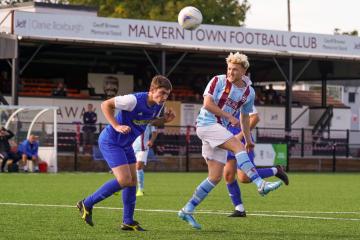