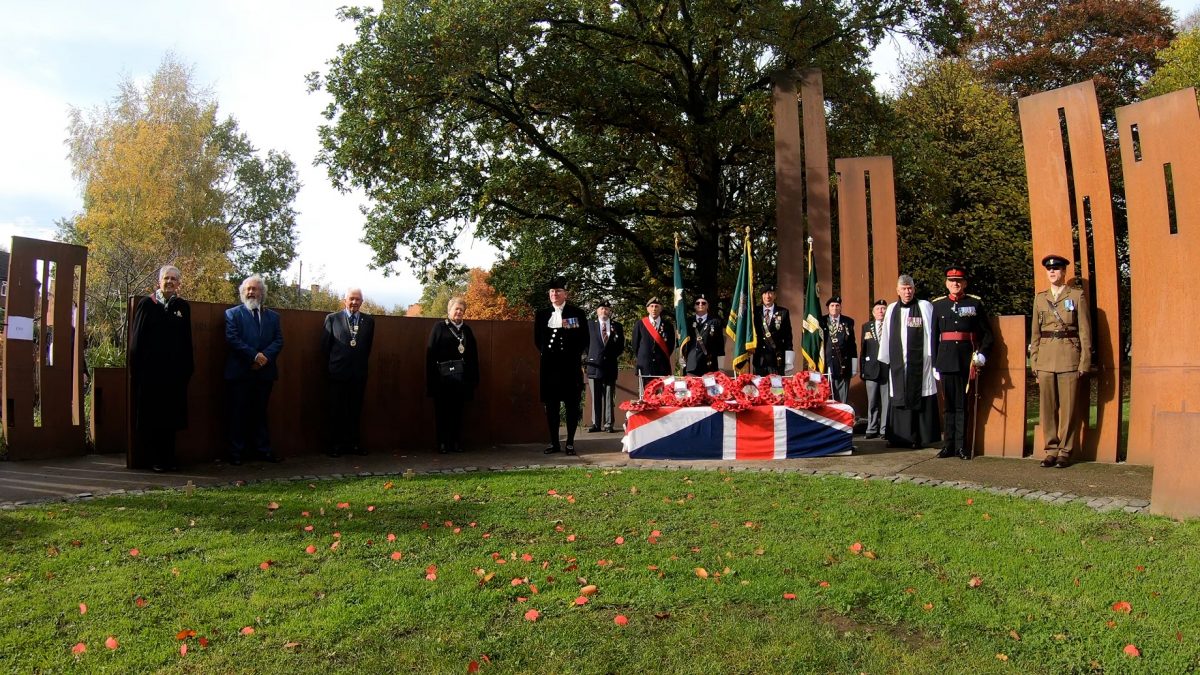 A MEMORIAL to those whose gave their lives at the Battle of Gheluvelt proceeded despite the ongoing Coronavirus pandemic.

The Worcester branch of the Worcestershire and Sherwood Foresters Regimental Association held their annual Gheluvelt Service at the Interpretative Feature in Gheluvelt Park on October 25.

This year due to the current Covid-19 restrictions there was no publication or advertising of the service beforehand to help in keep the numbers of the public attendance down.

Dignitaries, associations and other groups were restricted to one person from each invited to lay a wreath.

The service was conducted by the Rev Colin Jackson MBE who read out a short account of the Battle of Gheluvelt.

On October 31, 1914, after ten days of battle, nearly every unit had been drawn into the battle line and had been broken beyond recovery.

The 2nd Battalion The Worcestershire Regiment was the last available reserve of the British defence.

At 12.45pm The Battalion advanced to a railway embankment to prevent the enemy advancing up the Menin Road. At 1pm, Major Hankey was given orders to counter-attack.

At 2pm with bayonets fixed, the Battalion moved off in file. Everywhere there were signs of retreat. The Worcesters alone were moving towards the enemy.

In the grounds of Gheluvelt Chateau, they closed with the enemy. Almost over run the South Wales Borderers had made a wonderful stand. All day they held their ground at the Chateau. Their resistance had delayed and diverted the German advance.

The village was secured but it was not possible to hold it permanently. Nevertheless, the main force of the enemy had been driven out and the peril of a collapse of the British defence about the Menin Road had been averted.

The 2nd Battalion held firm on the ground which they had won. Behind them, General FitzClarence reorganized his troops and made preparation for further resistance.

The day’s fighting had cost the 2nd Battalion dearly. A third of the Battalion’s remaining strength, 187 all ranks, had been killed or wounded.

The ferocity of the Worcesters counter attack shocked and stopped the German advance to the channel ports denying them the use of a deep water port, that at the early stages of the First World War could of shortened and changed the course of the conflict in the Germans favour.

Deputy Lord Lieutenant Brigadier Roger Brunt CBE, the High Sheriff of Worcestershire Lt Col Mark Jackson MBE, Mayor of Worcester Coun Jo Hodges and Captain Matt Styles of 4th Battalion The Mercian Regiment were among those to lay a wreath during the service.