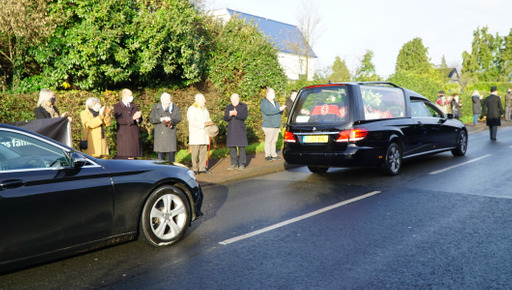 WORCESTER said goodbye to Cecil Duckworth as thousands lined the streets to pay their respects to the adopted son of the city.

The entire Worcester Warriors playing squad, coaches and staff – past and present – lined the entrance road and applauded the funeral cortege to honour Cecil for his immense contribution to the club over more than a quarter of a century as owner, chairman and President.

With COVID-19 regulations severely restricting the numbers able to attend Cecil’s funeral service the decision was taken for the cortege to make a tour of the city to allow the many people who benefited from his philanthropy to pay their respects.

The cortege started the tour in St Peter’s at Acorn’s Children’s Hospice which was built thanks to Cecil’s generosity.

A crowd of Acorns staff, nurses and volunteers paid their respects as the procession moved along the road, alongside a banner which read: “Thank you Cecil Duckworth CBE, from your Acorns family. Your vision and generosity made this Worcester children’s hospice possible.”

Mayor of Worcester, Coun Jo Hodges, paid her respects to Cecil when the cortege stopped briefly outside Worcester Cathedral and then past Worcestershire County Cricket Club’s ground at New Road. Cecil was also President of the cricket club.

The next stop was the Worcester Bosch factory in Warndon, the company Cecil built from humble beginnings into one of the city’s major employers following his invention and development of the combi central heating boiler.

Sixways was the last stop on Cecil’s final journey before a private family cremation.