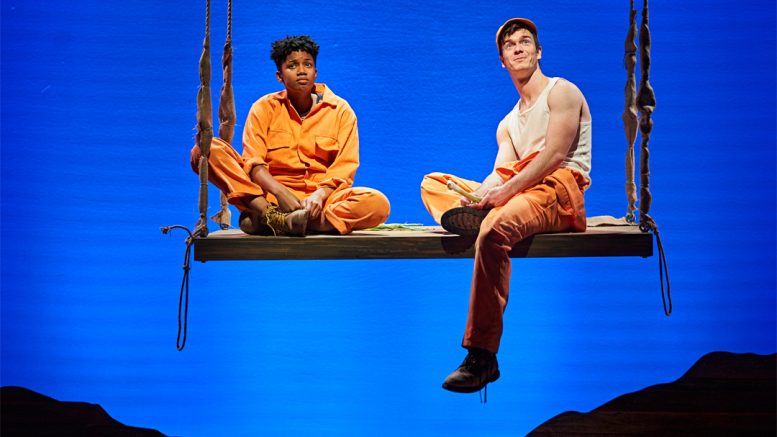 Stanley Yelnats – not so much a name, more a palindrome – finds himself following a family tradition by getting himself banged up for a crime that he didn’t commit.

Condemned to a modern day chain gang – that’s the Cool Hand Luke bit, by the way – he’s forced to dig holes all day, which would otherwise be a pointless exercise were it not for the tyrannical warden’s ulterior motives.

Stanley, played with an engaging geekiness by James Backway, soon falls foul of the sheriff, who exudes shack loads of chain gang-style unpleasantness courtesy of John Elkington, one mean dude who can decide on a whim whether or not one’s life is beastly or barely bearable.

Meanwhile, we learn all about the mythical Kissin’ Kate Barlow, a 19th century outlaw who never existed which is why she had to be invented.

However, this fast-moving badlands odyssey frolic through America’s arid south west never gets too heavy, thanks to creator Louis Sachar’s talent for leavening the bread just when the dough’s getting a tad sticky.

Meanwhile, director Adam Penford relentlessly pushes the pace throughout, making the most of the numerous priceless moments that occur in this offbeat comedy saga.

Productions such as Holes are a welcome development in the performing arts because the theatre audiences of tomorrow are the youngsters of today who have caught the bug.

Earlier performance times help too, and are perhaps better suited to fitting in with the hectic timetables of today’s parents and children. This innovative approach by Malvern Theatres should be welcomed, and may we see more shows like Holes. It runs until Saturday (March 7).

Iceland is going to give away free food to online customers on the last day of its shelf life. Here’s how the ‘Free on Last Day of Life’ scheme works. Worcester News | What’s On …

The Pumpkin Festival returns this weekend, just in time for Halloween. Worcester News | What’s On …

Make the most of the season’s colours with these best woodland walks in Worcestershire. Worcester News | What’s On …