THE cost of damage caused to the entrance of Pitmaston Park by a utility firm is not yet known, according to Worcestershire County Council.

The ‘major structural damage caused by the utilities’ was revealed by Councillor Alan Amos after the entrance heavily flooded last week.

A Worcestershire County Council spokeswoman said: “The issue was brought to our attention last year, however, the drain was functioning to some extent but was slow to drain during periods of heavy rain.

“We are unable to follow the existing line of the pipe so we are currently exploring options to reinstate the connection.  The cost of the works required has not yet been finalised.

“This will be funded from our capital drainage budget.”

However, the county council said it had been unable to find out how the original damage occured.

A spokeswoman said: “It is difficult to establish who caused the damage. There are a number of utility services within close proximity and our investigation was inconclusive.

“Our CCTV survey showed a collapsed pipe and when we dug down to repair we found a number of utilities in close proximity to the break.

“We are planning to undertake works during the summer holidays to avoid disruption to the school and we anticipate the new connection works will take 3-5 days.”

The park’s gate is being used as the sole entrance for pupils attending nearby Pitmaston Primary School as well as for visitors and dog walkers that use the park. 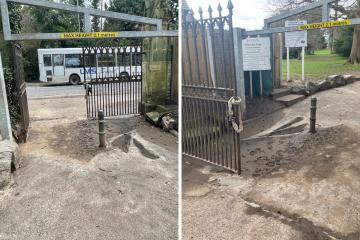 Whether itâsÂ Aldiâs SpecialbuysÂ or theÂ Middle of Lidl, the latest offers are always worth checking out …

A BROMSGROVE ice lolly company’s top productÂ has been the surprise hit of the summer in UK cornershops. …