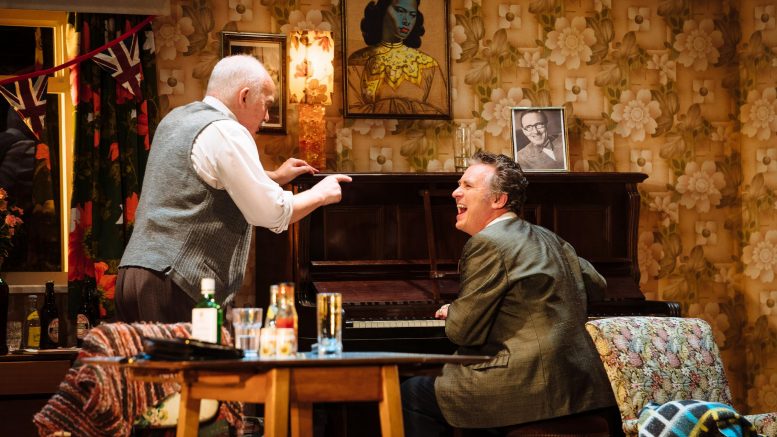 TWO worlds are coming to an end. One takes the form of a declining ex-imperial power flexing its military muscles for the last time, the other in the shape of the rapidly fading star of a travelling showman.

Archie Rice’s existence revolves around playing clubs and provincial theatres, peddling the same old bitter jokes. He makes a living out of unpleasantness masquerading as humour.

You don’t have to be a card-carrying member of the PC tendency to wince at his racist and sexist lewdness.

Meanwhile, his soldier son is with the task force helping to stuff it up the Argie junta which has invaded the Falkland Islands.

Much of the action occurs in the Rice family home, a place of tension where everyone endlessly bickers, shouts and constantly drinks gin.

Shane Richie is utterly magnificent as Rice, redefining the role made famous by Sir Laurence Olivier, and making it his very own.

You can tell he is a man who has actually felt the beer-soaked tackiness of working men’s club carpets, tasted the tobacco laden air, and seen far too many chicken-in-the-basket Saturday nights.

He’s tragic beyond belief, a man who has no fear of death because he dies night after night.

Sara Crowe as long-suffering wife Phoebe remains at her husband’s side like a wet beer mat sticking to the glass, despite his hopeless lifestyle, while Pip Donaghy as grandpa Billy Rice sits in his armchair, growing evermore bewildered as the Britain he once knew goes to the dogs.

John Osborne’s play was written around the time of the Suez crisis in 1956. It has been updated to find itself in a new setting which nevertheless echoes the theme of the original work in which Britain’s last colonial gasp mirrors the death throes of an entertainer whose time has past.

This is gripping theatre and really should not be missed. It runs until Saturday (September 14).