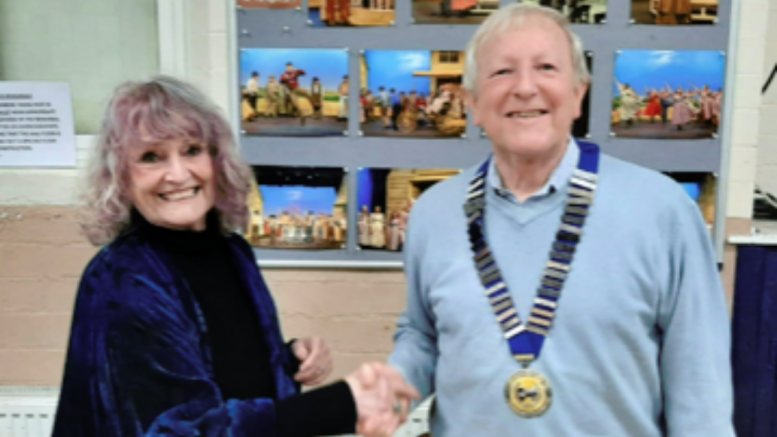 THE retiring president of Worcester Operatic and Dramatic Society has handed the title over after three years.

Ann Hasnip has been president of the society for the last three years, completing a longer term in office due to the Covid-19 pandemic and the closure of theatres.

She has passed the role on to Mike Astles, who has been a member of WODS for 35 years.

A spokesperson for WODS said: “Mike is very excited to be President at a time when the theatre is coming back to life as well as celebrating the society’s 130th anniversary this year.

“He has been a member of WODS  for 35 years, although he has never performed on stage.

“Mike’s skills are concentrated more on being behind stage.

“He has turned his hand to lighting, and as stage manager as well as being an active committee member for over 12 years.

“He has looked after the upkeep of the premises at St Mary’s Hall as hall manager, health and safety officer and production manager as well as supporting many other theatre groups locally back stage.

“He is looking forward to presiding over our forthcoming production of Kipps, the new Half a sixpence musical next week at the Swan theatre.

“Mike will be seen welcoming the audiences.

“Kipps is being staged after two years of waiting, following lockdown four weeks before opening night in 2020.

“They have a cast of wonderful actors, singers and dancers who are bringing to life this fabulous musical.”

WODS will be putting their production of Kipps on stage from Tuesday April, 26 – Saturday, April 30.

The performances begin at 7.30pm each day and on Saturday the cast will also be performing a matinee at 2.30pm.

Students can purchase half price tickets for the Tuesday and Wednesday performances.

Tickets can be purchased from Worcester Theatre box office at Huntingdon Hall at 01905 611427.

Kipps follows the story of Arthur Kipps, an orphan and an over-worked draper’s assistant.